skip to main | skip to sidebar

My husband and I have been married 33 years as of today. (We got married when we were fourteen.) We had such a lovely outdoor wedding planned, but there was rain . . . there was mud. . . there was a tornado . . . . There were 300 guests, because I am from a very small town and once you invite anyone beyond the relationship of first cousin, you have to invite everyone. We had possibly the happiest reception of any I have ever attended -- folks were so determined that the day not be ruined that they really extended themselves. At the time, I was only on stepmother number two, and someone commented later that it seemed that everyone to whom she was introduced was another of Gannet's grandmothers!

The Quiet Husband is leaving tomorrow with a group from my church for a learning trip to Nicaragua. I say "my church" because The Quiet Husband is not a religious person. In 33 years we have learned to make space for widely divergent paths, and so he has become an internet architect with an interest in fair trade and third world issues and I have become an almost-seminarian and would-be spiritual director. A couple of weeks ago he announced that he was thinking about joining the Peace Corps when he retires. The Lovely Daughter rolled her eyes. Just home from college for the summer, she had been visiting friends. "Everyone else, when asked what their parents are up to, says, 'They're working, same old stuff.' I'm supposed to say, "My mom is going to seminary and my dad's thinking about the Peace Corps. What kind of family is this?'"

I stacked up all the books I have planned for summer reading. I have about eight weeks left. There are 87 books. They range from poetry to Catholic spirituality to contemporary novels to John Calvin to Talmud to early Christian history to . . . Oh, never mind. I have to clear out the basement and the attics and deal with the gutters and the plumbing and the plastering and four years worth of photo albums.

The Lovely Daughter and I are off to Chautauqua on Sunday for the opening day of the season. The chaplain is John Buchanan, pastor of Fourth Presbyterian in Chicago and Editor of The Christian Century. I think I might try to get over there for at least a couple of more Sundays this year. I might add that the Quiet Husband and I met as college student employees of one of the Institution's historic hotels (no longer operating as such), where we spent a most excellent summer. 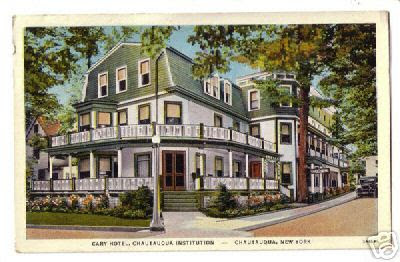 Last summer was the first in which The Lovely Daughter and her oldest brother did not spend at least some time at Chautuaqua; his twin had already missed a couple of years due to summer study in Europe. I so hope that when they have families of their own they will make their way back, at least on occasion.

Yesterday was the best day of the year, The One With The Most Light. Today is so lovely that there is no point at all in thinking about the fact that we are now pointed toward the One With The Least. Better to think that we are looking toward the Chautauqua season and all new things thereafter.

Wow - you get to hear Buchanan speak? Cool. I've always wondered what exactly Chatauqua was; now you've provided me with the website. And congrats on 33 years - Beloved and I celebrated 3 years last month and I'm looking forward to the next 30 very much.

I know another couple who married outdoors and a tornado struck the recepetion, at a farm in Wisconsin. yeesh. What a lovely story and memory. We're married 22 years this summer.

I loved reading this. Let us know how TQH's learning trip to Nicaragua went. I'm hoping to get El Jefe to join me on a learning trip with our church next year--there are several planned, but I'm inclined to the Northern Ireland (peacemaking) or the Costa Rica orphanage.

Hasn't God blessed us to have "second" or "third" careers in life these days?

Happy anniversary, lovely Gannet. (I wonder if TQH would enjoy the silence of Quaker meeting with Mr. M?)

This is a beautiful post. You're steeped in richness.

Sounds wonderful- a great post- have a wonderful time!

Happy anniversary...consider yourself fortunate that you actually have plans for your lives :)

I agree with QG. This was a joy to read.

This is beautiful to read. Thank you for sharing. Sounds like you have quite a few books to read also.

What lovely experiences. Thank you for sharing them so eloquently.

Your family is so rich with flavor and interesting to learn about.

Happy Anniversary, GG. 33 years is a very long time. Poor Lovely Daughter. Her reaction sounds akin to that of a pre-teen or teen upon finding out that his/her mother is pregnant. Major eye rolls and squeamishness all the way around. Enjoy Chatauqua. My brother is going up there late next week for a week.

Happy, Happy Anniversary, and you're going to Chautauqua! How wonderful!

And you have a VERY COOL family- your daughter is lucky!

And this post is the first that's given me a clue that you might not be too far away from me. course you're about to go to seminary who knows where. i'd love to do a meet up.

More Cows, I can't figure out how to email you from your blog, but if you emnail me we can see where we live.

And if anyone else reading this wants to do a meet-up at Chautauqua this summer, let me know. I would be so sad to experience another miss -- although not quite as extravagant as the one last summer when Peripatetic Polar Bear and I were apparently on the exact same tour in Chartres Cathedral and didn't know it!

Ah I have been to Chatauqua! Many years ago (pre driver's license) so I could not get there without some serious map study! :)

Maybe we should trade stacks of books... that could be fun!
;)

I hope you have a great time at Chatauqua.

The Other Blog ~ Reflections After the Death of Our Son

Spiritual director in the Ignatian tradition.

Writer, photographer, canoer, hiker, voracious reader ~ and someone who knows the beach is the best.

Why Gannet? Why Search the Sea?

Gannet Girl
Gannets are enormous and sleek creamy-white seabirds, with black wingtips, yellow heads and necks, and startlingly outlined eyes. They nest on the rocky cliffs of the European and North American coasts of the North Atlantic and, once grown, spend their days sailing across the ocean. The acrobatics by which they make their living ~ steep climbs into the air and speedy plunges straight into the sea ~ are rivaled only by those of pelicans. What better metaphor for a sweeping search of one's life choices and opportunities than a gannet extended above the waves, a regal and yet restless surveyor of the vast ocean surface? The gannet reminds us that life is an adventure in both beauty and profound unease, and that the sea itself is limitless in its textures and possibilities.

Gannet Way Out Over The Sea - a gift from Stushie